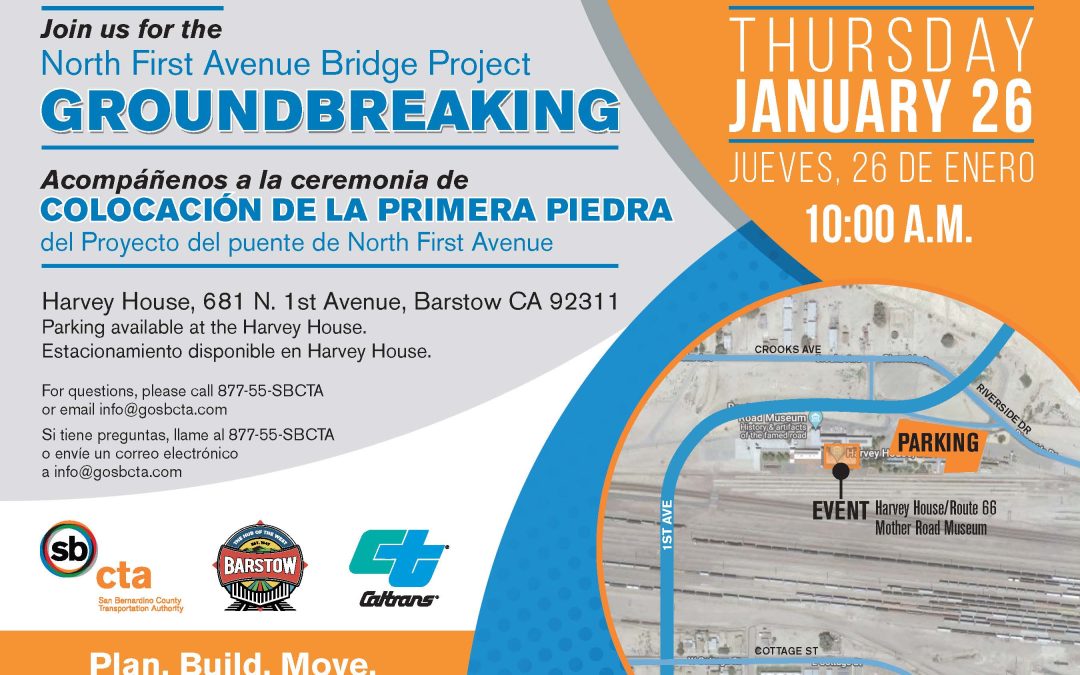 BARSTOW, CA – Nov. 28, 2022– On the heels of the recent BNSF Railway announcement to develop the largest railway hub in the western United States in Barstow, the City of Barstow is making its first notable infrastructure development by planning the replacement of the city’s historic bridge.

Built in 1930 and modified in 1943, the North First Avenue two-lane steel and wooden bridge has served as a thoroughfare for several decades. It was deemed a focal point of the railroad industry but no longer meets the structural and functional standards needed as the city undergoes a major railway industry transformation.

“As we gear up for the major BNSF Railway project, which will double our city’s population, this bridge replacement marks the beginning of the transformational change to our community,” said Barstow City Manager Willie Hopkins. “The bridge has served as the main thoroughfare for schools, hospitals and other services, and the new one will be a mark of improved goods movement as we embark on enhancing our city’s infrastructure.”

The new bridge is being funded through various sources, including the Federal Highway Bridge Program, state funds, Measure I funds, and the City of Barstow. Ground is slated to be broken in January 2023. As construction takes place, a temporary bridge will be erected parallel to the existing bridge so traffic will not be impacted.

Domingo Gonzales, City of Barstow engineering services administrator, said the new bridge will be more modern and constructed out of concrete. It will have a wider sidewalk on one side for a pedestrian walkway, eight-foot shoulders for bicyclists, and a lookout point for individuals to view the prominent railroad. It will be approximately 1,179 feet long, with a width of 50 feet that expands to over 62 feet to accommodate a left turn lane that extends onto the bridge structure. Its aesthetics will mimic the city’s popular destination of the Harvey House with its antique lighting and quaint touches.

The new bridge is the first replacement in a series of three bridges slated for renovation. The next two are over the Mojave River and the river’s overflow area. Construction of those will start in two to three years.

Hopkins said the bridges are one of several infrastructure changes that will take place in the city prior to BNSF breaking ground on its massive railway project, which was announced in October.

BNSF Railway plans to invest more than $1.5 billion to construct a state-of-the-art master-planned rail facility in Barstow. The Barstow International Gateway will be an approximately 4,500-acre new integrated rail facility on the west side of Barstow, consisting of a rail yard, intermodal facility and warehouses for transloading freight from international containers to domestic containers. The facility will allow the direct transfer of containers from ships at the Ports of Los Angeles and Long Beach to trains for transport through the Alameda Corridor onto the BNSF mainline up to Barstow. Once the containers reach the Barstow International Gateway, they will be processed at the facility using clean-energy powered cargo-handling equipment, and then staged and built into trains moving east via BNSF’s network across the nation. Westbound freight will similarly be processed at the facility to more efficiently bring trains to the ports and other California terminals.

“A lot of positive changes are in the works for Barstow, and we are excited to see it all come to fruition over the next several years,” Hopkins said.

More information on the City of Barstow can be accessed at www.BarstowCA.org.

This will close in 0 seconds